I had begun to think that the katydid was either a myth or that I was doing something wrong.  After all, they are not un-common, there are over a thousand species of katydid/bush crickets in Australia, and I like to think that my garden is somewhat of an oasis – so why hadn’t I seen one ?

Then last night I heard a quiet chirp and a scratch of something against a fly-screen, so I grabbed my torch and went out to investigate … finally a katydid!  And just the one I wanted to see, the 32 Spotted Katydid.  So I popped it in a big jar with a lettuce leaf (for a bit of atmosphere) and left it in the kitchen overnight.

This morning I was able to study its beautiful markings and to count its spots – this one did appear to have 32 of them, but apparently the number varies.

It seems that they tend to live at the top of gumtrees. I only have two and they are at least sixty metres tall – which probably explains why I haven’t seen them at ground level before.  Perhaps the last two days of incessant heavy drizzle washed it from its perch?

I have to say that its face reminds me more than a little of the extra-terrestrial in the movie Predator (you have to be an Arnie fan to have seen this one).  But this creature is beautiful and far less threatening. 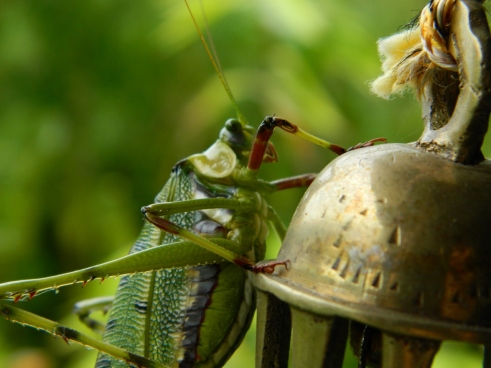 Katydid on the wind chimes 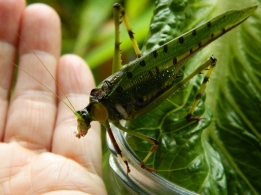 32 Spotted Katydid climbing out of the jar