It took me a while, but I finally found a suitable spot for the Bat Cave after I confirmed that the Tawny Frogmouths sitting in the banana tree just metres away, DON’T eat microbats.

The cave has a landing strip, an emergency exit, hanging rails with room for two rows of bats and a removable hatch with a porcelain handle in case I can’t resist having a “sticky beak”.  If there was a bat version of Trip Advisor, this cave would get 5 Stars !!

Within hours of posting yesterday I had the offer of a roosting box from a local couple who live in the bush just outside town.  Jack and Helen are so fond of microbats that they build and hang roosting boxes in the eaves of their house.  In the warmer months, they leave their doors and windows open, allowing the bats to race through their house in pursuit of insects.

But, there’s been a development…  This morning when I went out for my early morning walk, I disturbed an owl.  It was sitting on a chair right beside the garden umbrella, and when I looked up into the umbrella … no bats !

Local ornithologist Richard has confirmed that it’s a Southern Boobook and added the comment “bats actually fly quite slowly, so they are a good prey item for owls”  I’m a bit distraught!

Jack and Helen did tell me that the microbats move around quite a bit, and that it’s doubtful they would have spent the winter in a flimsy umbrella, so I’ll find a spot for the roosting box and hope that the owl loses interest and that the bats return.

Here’s one of my many wise sayings …

You want to be sure that you don’t mind sharing your house or garden with whatever expelled it.  So when I noticed some new poo at the base of my garden umbrella, I did just that.  I very carefully wound the umbrella open a few turns and stuck my head slowly up inside the folds.  There to my surprise I discovered a family of microbats.

I’ve heard of microbats and I know they live in the Bellinger Valley but I’ve never seen one before.  They are about the size of a large mouse, they have the most fearsome little faces (and teeth!), and they were not at all happy with me trying to take their photo.

Now this discovery poses a bit of a problem – microbats are classified as vulnerable due to loss of habitat and feeding grounds.  If they have decided that my blue umbrella is their new roosting spot, does this mean I have to buy another garden umbrella ?? 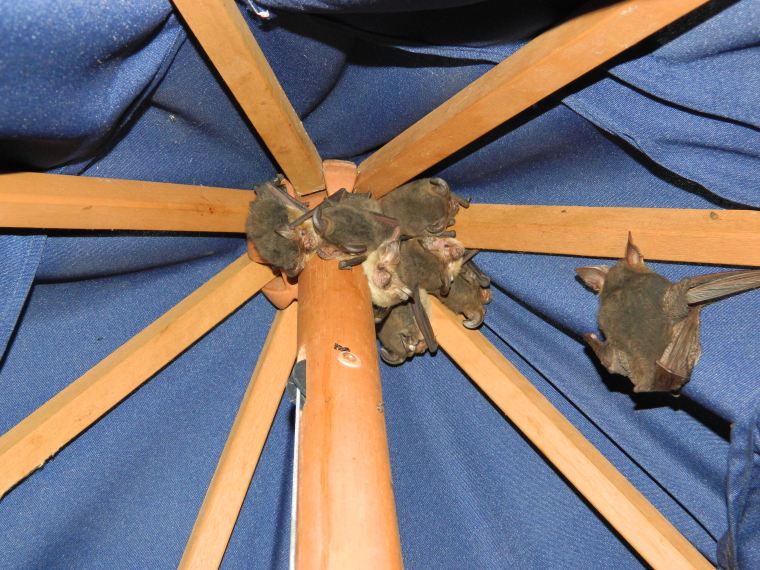