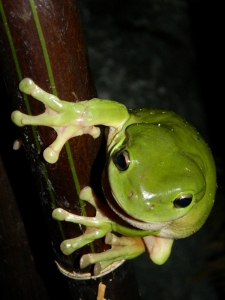 This will be my last frog post for a while … not because nothing is happening in the frog pond, but because there is a real danger that I will become known as “that mad frog woman” who spends her evenings crawling around in the dark with a torch in one hand and a camera in the other!!

So, the frog population seems to have stabilised, and they have all taken up a favourite spot … the big Green Tree Frogs love the black bamboo, the Red-Eyes cling to the fronds of the tree ferns, the Dwarf Tree Frogs arrange themselves on the rocks at the edge of the pond, the Striped Marsh Frogs float next to the rocks and that Damned Smooth Toadlet makes himself invisible in the leaf litter.

Meanwhile the ecology of the pond is developing.  As well as damsel flies, there are now water boatmen and assorted tadpoles, as well as four goldfish and several small fry.  The water lettuce is multiplying and the insect-eating bladderwort is flowering.

Several people have asked where I get my frog information … if you have a smart phone you can download the Australian Museum’s Frogs Field Guide app for $1.99. It has photos, sounds, location guides and even a Frog Log where you can record your frog sightings.  And … if you think you’ve identified a frog you can play the sound and if you are correct, the frog will answer back!!

If you don’t have a smart phone you can buy Dave Stewart’s CD Australian Frog Calls – Subtropical East but obviously there no photos, and you have to keep running backwards and forwards between the pond and your sound player.

Frog Fact: Did you know that frogs have selective hearing and only hear the calls of males of their own kind?  Unfortunately, humans can hear them all !! 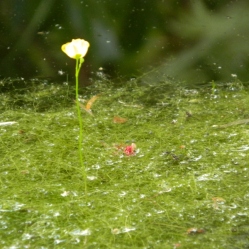