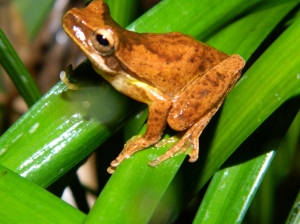 A few nights ago, as I was lying in bed lulled by the sounds of the night and the rain gently dripping from the trees, I became aware of a new sound coming from the direction of the frog pond. I wasn’t really expecting to hear another new frog this late in the season, and the thought of leaving my bed and mounting a pond expedition was not exactly appealing … but it did sound almost frog-like, so from the comfort of my bed, I consulted the Frog App on my iPhone, and there it was, right at the end of the list …. a Whirring Tree Frog!!

Getting a photo of this frog proved to be quite difficult since my pond is now so overgrown and frog-friendly that it’s not really human-friendly any more.  Add to this a recent sighting of a very pretty yellow and blue tree-snake, and the idea of wading to the other side of the pond in the dark with a torch and a camera was a bit daunting.  But finally, on the third night, a co-operative frog positioned himself in an accessible spot and I was able to take a photo.  Unfortunately this frog is really shy and went quiet every time I tried to sneak up to take a video. This is the best I can do – a view of one of my ponds, with Whirring Tree Frogs calling nearby, and a very quiet Whirring Tree Frog in the rain.  Turn up your sound to get the full effect, and that’s frog species number eight in case you’ve lost count !! 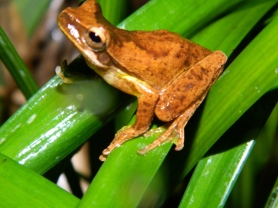 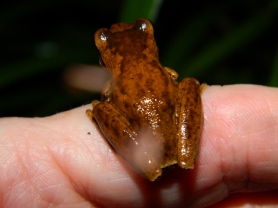 2 thoughts on “I heard a whirring sound …”