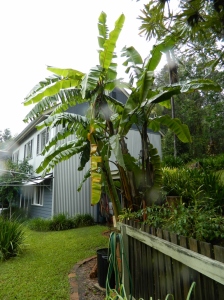 I was originally going to call this post “What to bake during a cyclone” but that would be slightly melodramatic even considering that it has been raining here for 48 hours non-stop, the bridge has gone under, we’ve had over 300mm of rain and now gale force gusts of wind. All this is courtesy of Cyclone Oswald which has wreaked even more havoc in Queensland.

None of this seems to perturb the frogs and what with the rain, the wind and the myriad of excited frog calls, the last two nights have been “ear-plug nights”.

Just before the bad weather arrived, I harvested the first bunch of bananas from my “dwarf” Cavendish banana plant.  I say dwarf, but as you can see from the photo, it is quite obviously NOT a dwarf.  The label says “a smaller growing form – up to 2.5 metres” but mine is nearly two storeys high.  The bananas however are definitely dwarf and deliciously sweet.

The extreme weather meant that I was trapped inside, so I spent the whole long weekend experimenting with banana bread recipes. This recipe turned out to be a close replica of the cafe-style banana bread I love.  It is spicy, light, not soggy and delicious with butter or yoghurt.  Thank goodness I found it because I am now a bit over bananas! 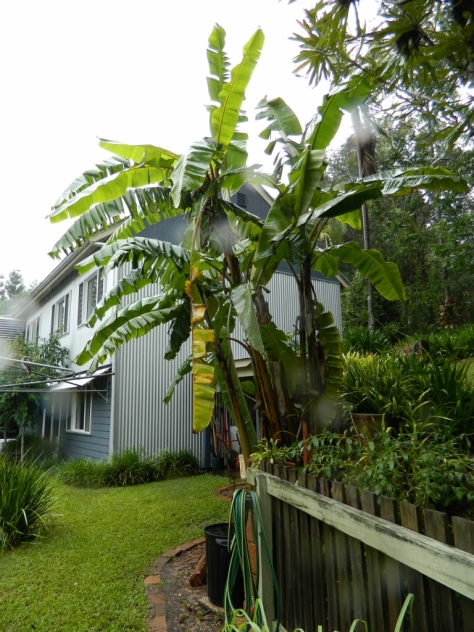 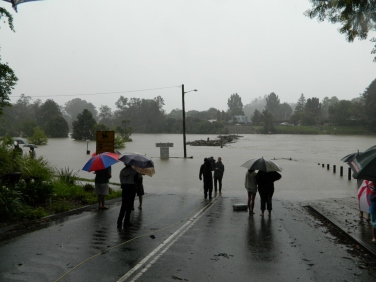